The National Academy of Sciences of Armenia is the top scientific institution of the Republic, based upon centuries-old original fruitful historical, scholarly, cultural and educational knowledge and traditions of the Armenian Nation, it is called upon to consolidate the efforts by the scientists to do basic research in many fields of science, to identify and to reconsider the spiritual legacy of the Nation in order to effect national security as well as social and economic problems. 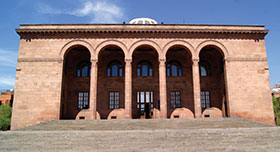 The first cultural, educational and scientific center of the Republic was Yerevan State University, temporarily established in Alexandropol in 1919. In the years of the First Republic of Armenia the University deployed research in culture, history and economics.
In the very first years of the Second Republic in 1921, an Institute of Culture and History was established in Etchmiadzin, to be renamed in 1925 as the Institute of Science and Culture, an entity of an academic trend aiming at developing natural, technical sciences and the humanities. Later, Institutes were established on protection of vegetation, on construction and building materials, geology, balneotherapy, a seismic station and a number of other scien 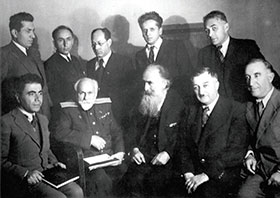 tific enterprises.
In 1935, on the bases of the mentioned R&D institutions the Armenian Branch of the USSR Academy of Sciences was established chaired by academician Franz Julievich Levinson-Lessing.
In 1938 the top scientist of the branch was Hovsep Orbeli. Work started on developing physics, mathematics, natural, technical and humanitarian sciences, whereby Armenia became a large center of Armenian Studies.
On November 10, 1943, a degree by the Government of Arm.SSR established the Academy of Sciences of Arm.SSR, with 23 noted academicians including M. Abeghian, brothers Alikhanian, R. Acharian, Av. Isahakian, V. Ambartsumian, brothers Orbeli, et al. The first elected president was Hovsep Orbeli, an outstanding scholar, historian and orientalist. 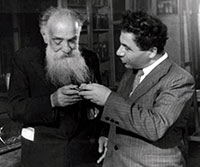 In 1947 a new President of the Academy of Sciences of Arm.SSR was elected – Victor Ambartsumian, a scientist of a world-wide recognition, the founder of theoretical astrophysics.
In the years of Soviet rule the Academy effected crucial research of worldwide significance in the fields of astrophysics, information technology, applied mathematics and mechanics, physics, chemistry, biology, Armenology studies and a number of other trends of science and scholarship.
Following the declaration of the Third Republic in 1992, the AS Arm.SSR was renamed to the National Academy of Sciences of the Repub 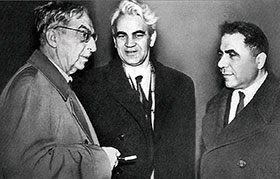 In 2010, an International Prize was established in commemoration of academician V.A. Ambartsumian.
In 2011, to enhance the capabilities for object-oriented use of the scientific and technical potential and for using the findings of basic sciences in applied projects, the President of the Republic initiated development of the Law on the National Academy of Republic of Armenia, which was approved by the National Assembly 04.14.2011.
Currently, the Academy continues to develop various branches of science and record 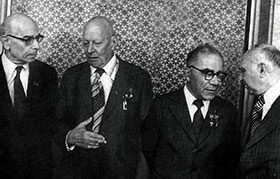 The Presidium of NAS RA has five scientific divisions on particular areas of science: 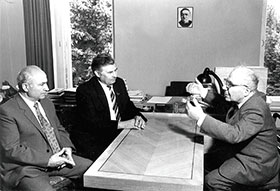 Within the Presidium there are scientific Commissions and Councils (Publication's Council, Computing Technology Application Commission, Expert Commission on protection of Lake Sevan) and Councils on particular scientific area in every Division. The scientists of NAS RA participate in scientific programs of many international foundations and other organizations.
The Governing Body of NAS RA is the General Meeting of the Academy including all Full Members (academicians), Corresponding Members of the Academy, Directors and authorized representatives of the Institutes. Between the General Meetings the Academy is being administered by the Presidium composed of 15 members:

The Academy has a staff consisting over 3800 people, among which there are about 340 doctors of sciences, about 1100 candidates of sciences. It has 36 academicians, 46 corresponding members, 5 Honorary members, 119 Foreign members and 43 Honorary doctors. Members are elected at the General Meeting held as a rule once 3 years.